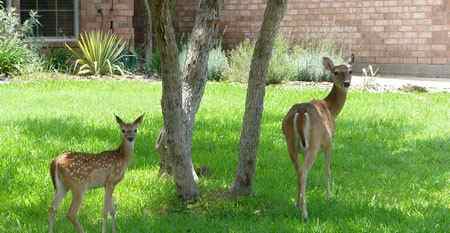 Dealing with deer in suburban gardens has become a significant

issue over the last decade. I easily remember a time when Montclair and surrounding towns were virtually free of deer. When fellow designers in areas farther west would bemoan limited plant choices, I almost felt guilty that I could plant whatever I wanted without concern.

Things started to change significantly around 2003, and every year since then the impact of deer on our local gardens has been more problematic.  This, in spite of yearly culling efforts, which in addition to managing  the population explosion, aid the re-growth of forests, reduce deer related traffic accidents and the slow the incidence of their tick born diseases.

Sometimes between deer issues and climate change, planting choices become so restricted that creativity is limited. Toss in a tree shaded, dry site, and you have the trifecta of design challenges!

I can’t debate the controversial politics of hunting deer (my ‘ex’ believed if they lived under our kitchen sinks, we wouldn’t think they were so cute), but I can comment on the ways in which we work to deter their destructive patterns. 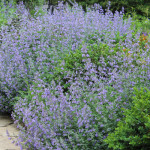 Deer are less likely to eat plants that are aromatic, have spiky, thorny  textured or hairy leaves. Any plant in the herbal or medicinal category: lavender, mint, yarrow or russian sage is of little interest. Boxwoods and peonies are other popular selections. Plants with thorns (holly or barberry), or hairy leaves (lambs ear) are also unpopular. Note, however, that starving deer will eat anything, particularly in late winter when food is scarce because the ground is snow covered. No rules are hard and fast in this game.  Your best bet is to plant things they like less and hope they move on. Avoid yew, hosta, and daylily as these common plants are among deer favorites.  A good list of deer resistant plants is from Rutgers University: www.njaes.rutgers.edu/deerresistance/

Deer fencing can be every effective, but it needs to be at least 7′ tall 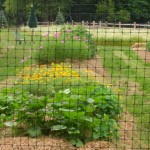 and  8′ is better. If deer can’t see where they are going to land they are less likely to jump fencing. Fencing plus adjacent planting can be very effective. In addition to regular mesh deer fencing www.bennersgardens.com, other barrier methods include ultrasonic devices www.electronicpestcontrolpro.com which emit a high frequency sound that deters deer, and wireless electric deer fencing that repels deer with a mild shock www.wirelessdeerfence.com. Fencing must always create a 360 degree enclosure otherwise you risk capturing deer in an enclosure that they can’t exit. 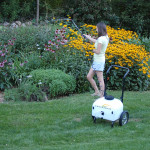 There are a myriad of biological deer deterrents. Many use bad odors or tastes (garlic, coyote or human urine, cat feces) to keep the deer moving along. As these odors are offensive to humans, I prefer to use commercially available spray mixtures that include various natural and chemical compounds: Deer Scram, Repels All and Deer Stopper are a few brands we have tried. The best practice is to use more than one and rotate, as the deer become accustomed to one smell and it can stop being effective.

Large dogs can successfully chase deer away, however, unless they are out all the time, including the night time, deer quickly find a way around them. It doesn’t hurt to have a dog though as anything that decreases their comfort level can be a good thing.

Finally an important warning :  Fall is deer breeding season! Half of deer related car accidents occur during the fall mating or ‘rutting’ 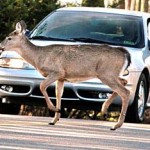 season when deer frequently and unexpectedly dart onto roads. Be particularly attentive during morning and evening commuting times when visibility is poor and deer are most active. Peak season is late October through November! Drive carefully.

WINTER REMINDERS It may be milder than predicted right now, but winter is far from over. Remember, snow is not…
in Recent Posted by LisaMierop
November 12, 2019December 2, 2019

As temperatures drop to freezing here, I am already nostalgic about a recent September trip to London and a few…
in Recent Posted by LisaMierop